Design a site like this with WordPress.com
Get started
Skip to content
May 23, 2015January 14, 2022 aditipremankit
Life of Pi..
Question that made me think and led to a realization..
Why did he (Pi) feel pain when he saw the tiger walking away into the woods? Can it be explained or only be felt?
What i realized:

Pi felt the pain coz he knew that the tiger belonged there, in the woods.. and no matter how much he would have liked it, to keep the tiger with him, he couldn’t. Their journey was together only until they reached the shore..

It was bcoz of the tiger that he survived in all those conditions, he owed his life to the tiger coz if the tiger had died or left, Pi’s instincts would have given up. They say the instinct of survival is the strongest, and having the tiger, such a ferocious animal on that boat, made Pi stay alert all the time. So even though it was bcoz of the tiger that he survived, he deeply knew that the tiger belonged in the woods. So he let him go. And it pained him to see him go, since the tiger had become a part of him by then.
The journeys end when they are meant to. ^^
I was searching the ending of it, on the internet and came across a few pages that say that Pi weeps while he is carried across by other people on the island. And the reason why he weeps was bcoz Richard Parker didn’t look back even once…and he didn’t get to say a goodbye properly.
“I still cannot understand how he could abandon me so unceremoniously, without any sort of goodbye, without looking back even once. The pain is like an axe that chops my heart.”
In the novel, Pi relates the exact words he would have said given the opportunity:

“That bungled goodbye hurts me to this day.  I wish so much that I’d had one last look at him in the lifeboat, that I’d provoked him a little, so that I was on his mind.  I wish I had said to him then — yes, I know, to a tiger, but still — I wish I had said, ‘Richard Parker, it’s over. We have survived.  Can you believe it?  I owe you more gratitude than I can express.  I couldn’t have done it without you.  I would like to say it formally:  Richard Parker, thank you.  Thank you for saving my life.  And now go where you must.  You have known the confined freedom of a zoo most of your life; now you will know the free confinement of a jungle.  I wish you all the best with it.  Watch out for Man.  He is not your friend.  But I hope you will remember me as a friend. I will never forget you, that is certain.  You will always be with me, in my heart.  What is that hiss?  Ah, our boat has touched sand.  So farewell, Richard Parker, farewell.  God be with you.'”

But now the question arises..
Does it matter in the end? Does it matter to be able to say a goodbye?
It doesn’t matter. Coz even if we get to say a proper goodbye, which can be a bit satisfying for a few moments…but the pain of loss or separation is still going to be there. Isn’t it?
And the tiger doesn’t look back even once, just walks into the woods.. although he does stop for a brief moment, but he doesn’t look back. And it is definitely painful..
But i think.. what matters is not the ending, or whether we get to say goodbyes or not…what really matters is the journey itself. Nothing else matters.
^^ 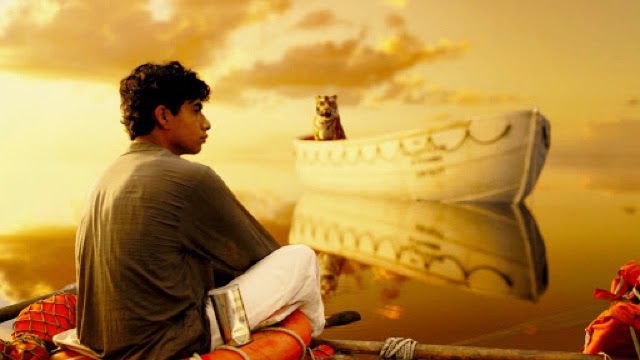